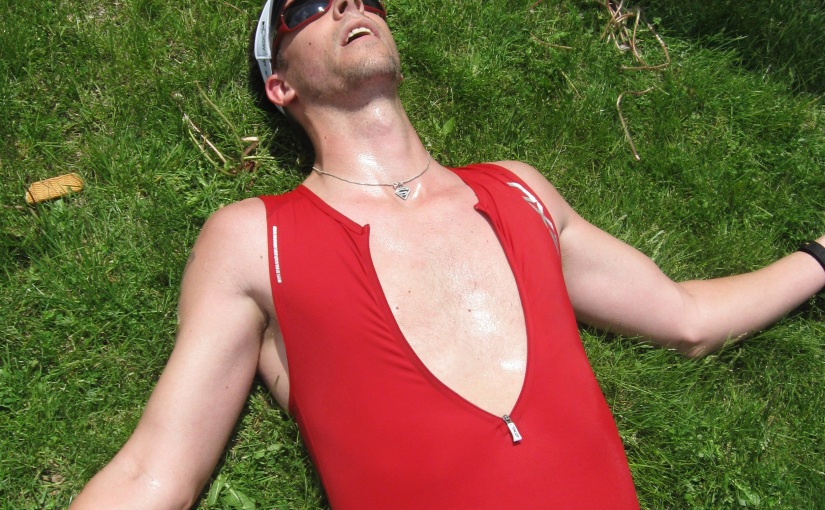 At the end of 2007 I had completed 5 Give it a Try races, the shortest distance that you can do.  It’s a pure sprint, but a great place to start if you are a beginner and just getting into this sport for the first time.

That off season and over the winter I educated myself immensely into the sport of triathlon, taking courses offered at Guelph University to help my swim stroke, and train with some other like minded people.  I invested in all the gear that would be needed as it certainly is not a poor man’s sport at all, wetsuits, bike equipment, spare tires, aero bars, saddle bags, unitards, and a big old bag to hold it all.

In 2008 I entered the full season of races, 19 in total and I decided to run a marathon at the end of the season as well.  Halfway through my 2008 season I completed my first half Ironman race as pictured to the right, and as that year wore on I continued to learn more and more about myself through this sport.  Every weekend, I would be in area of Northern Ontario trying something new for the first time.

The season started in Kitchener / Waterloo with the Victoria’s Day Duathlon, a 4km run with a 20km bike ride, sandwiched into between another 4km run at end.  No swimming involved with this race as in early May the bodies of water in Southern Ontario are still just a bit too cold to be swimming in.

I was having such a good time with each race weekend, I literally couldn’t wait for the next weekend and the next race.  For me it wasn’t about winning or losing, or how well that I did on each course.  WHile each race may be covering the same race distance, each course will always be slightly different based on the layout of the transition area, how close to the body of water is to the road, and the overall elevation of the surrounding area.

Gravenhurst being one of my favorite courses of the year, and during my years in the triathlon world this weekend was always my favorite.  The course itself was very challenging due to the elevation changes on the bike course as well as the run.  The very best part of this particular course is that the swim start was in the middle of the water after taking out the local steamship and then jumping over the edge to start the race.

Bobbing up and down in the water waiting for the canon to signify the start of the race and it was on from there…also can remember that you would climb up out of the water at the end of a wooden dock to run down and back into the transition area where you would get ready to hit the road with your bike.  I remember in 2009 during this race an climbing out of the water, starting down the dock only to see a few other sets of wet foot prints ahead of me.  That would turn out to be my best race I would have in the series, partly due to the fact i knew where I was positioned in the field, able to maintain that position on the bike, and then hold on for dear life during the run.  A normal Ed Dillon type of triathlon.

One day at work in December of 2008, I received an email from the good folks at Ironman Kentucky thanking me for my entry into the 2009 race.  I sat there for a few minutes trying to remember if I had entered that race last night and simply forgotten about it.. ha ha… not a chance.  In all honesty I need to thank Stephanie Clarke who had paid for and entered the race for me, as a parting gift if you will.  She once told me that she wanted me to chase my dreams despite my circumstances in life.

So here it was, the athletic challenge of a lifetime staring at me right in the face, I had ten months to get ready and would give me the challenge of a lifetime over the coming summer.  That winter I had to come up with a bullet proof training plan that would give me the physical tools to get through the race and equally important to me was the mental aspect that this day would require.

That summer leading up to race day I did some amazing things that I never would have thought possible, each one testing both my physical and mental toughness as race day drew closer and closer.  Three races over the course of one weekend was an early season test, I remember doing an intense training day on Saturday in Milton and then racing the Peterborough Long course the next day.  A month later I would do back to back half Ironman distances on a Saturday and then Sunday to make sure that I could handle the distance.  It was during the that second race where I would experience the only mechanical breakdown I would have during a race… at least until the Ironman race itself.  But that is a story for another day.