I live in Central Ontario, and I would often comment to my wife at the time when we would drive up here to visit them just how much snow fell throughout the winter.  I am six five in height and often the ends of driveways were taller than I was.  Just crazy.

Five years ago we moved up here and bought a house that had a four car driveway… I never did get a snow blower in the four winters that I lived there and man o man did I do a lot of snow shovelling.  Like ridiculous amounts of shovelling, see below…

Now I live just down the street my old house and I share a driveway with a neighbour.  I have never had a shared driveway before in any of the places that I have lived.  So what is my morale obligation when it comes to shovelling the driveway?

How much of a good neighbour do I need to be?

This lady is a single mom, with two young kids… okay stop right there.  There have been a man/men over on a regular basis so I know that she in not living the single lifestyle.  And I am ONLY saying she has help shovelling the snow.  And in this day and age woman can do anything that men can right?  Should that not include snow removal? 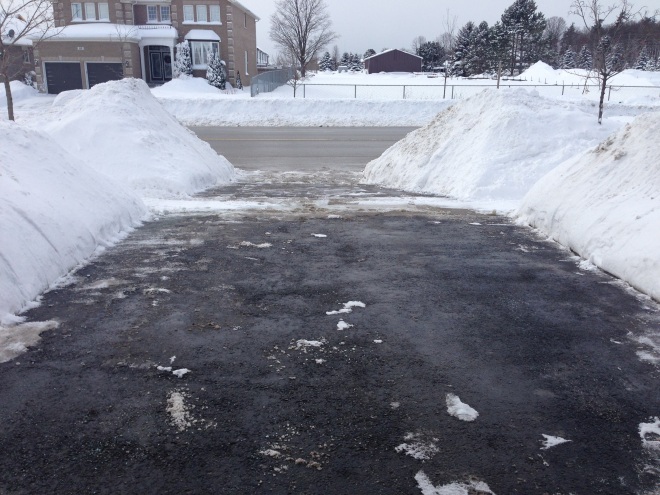 The lady has never been neighbourly, at times doesn’t even say hello in passing.  Our only other interactions in the last few months has been, can my kid jump on your trampoline when she first moved in… and do you have a wine opener?  That’s it… I jokingly laugh as I type this as I was never the neighbourly type myself until Jodi changed my thoughts on what a neighbour should be.

The other thought that stood out was at the tail end of my time was at my old house, Danielle on several occasions only shovelled HALF THE DRIVEWAY leaving the other half untouched.  Like fuck you, I am only taking care of myself.  Despite every time I would do the whole thing, every time… it was such a slap in the face.

And my final thought as I was finishing up was if I do this now at the beginning of winter do I set a precedent for the rest of the season.  Free snow removal?

It was such a tough decision…

…. I shovelled her driveway.  Took less than five minutes, it was a good shoulder and back workout and I will have helped put a smile of this ladies face when she comes home today.  That in itself is good enough for me.  Go put a smile on someone else’s face today.

One thought on “The Joining Driveway Dilemma”