I loved my 2005 Saturn Vue, a car line that was discontinued at some point when American motor sales were struggling and GM closed down this particular line of vehicles.  I drove two of them in a row, and would have continued to purchase this line of cars as I found them both fun to drive and very reliable.  My Saturn Vue was with me through my entire triathlon career, was driven down to Florida and back on more than one occasion and was my car when I went down to Kentucky and did my Ironman race in 2009.  I really wanted to see that car reach 300,000 km and it finally had to be retired at 296,000 km and change as it was looking at a costly repair bill.  That is when I got my 2013 Toyota Corolla as we needed a commutator car at the time and I was driving from Barrie to Vaughan and back on a regular basis.

The Toyota was okay, and during it’s time I racked up 135,000 km on it in no time, but I hated the sight lines on it.  I was used to driving up at a higher driving angle for over 8 years in my Vue, and now I was continually getting blasted my other cars right into my eyes.  One of the drawbacks to having laser eye surgery is slightly reduced night vision, and this became readily apparent when I started to drive the Toyota.  When the opportunity earlier this year presented itself to get a new car, I really started to think long and hard about what I really wanted.

I knew whatever this purchase was going to be, this car was going to be with me for a good long while.  I quickly dismissed the idea of a flashy sports car that screamed mid life crisis, and started thinking about a Jeep.  I’ve always wanted a Jeep as it represents to me a lifestyle choice and the freedom to go just about wherever you could possible want to go.

Driving is fun, pavement is optional.

So I began the shopping process and would endless build my dream Jeep on their website over and over again, never quite bringing myself to actually order it.  I believe initially I was waiting for the sale of my house to go through and perhaps the extreme cost of getting a brand new fully loaded Jeep Wrangler. 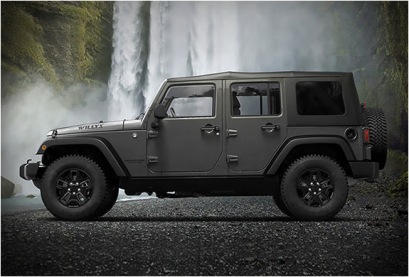 And for me the Wrangler was the only way to go, after all Jeep makes several different lines of Jeep but there is only one Wrangler.  The Wrangler, and its predecessor the YJ are the only Jeep that comes with the Jeep wave.  Yes there is such a thing as the Jeep wave, just look it up.  And it is only for those who drive the Wrangler model, we look down our collective noses at them other fake Jeeps as I like to call them.  All kidding aside, I wanted the Jeep that could drive through rivers, over mountains and go wherever I decided that I wanted to go.

I finally decided to do to visit a dealership, and with Austin along for the ride took one out for my first test drive and the first time that I had ever driven a car with that powerful of an engine.  To be honest I was a little scared, well very scared when I first got behind the wheel as it was powerful beyond imagination.  It was driving a tank at first, and seeing as there was still snow on the ground I engaged the 4 wheel drive and literally drove through snow banks, over snow piles and any other obstacle that I could find.  I was instantly sold and knew that I would be buying one in short order, so I started to search for the best deal that I could find.

I initially started at the Barrie Jeep dealership, and unfortunately for that salesman he didn’t think I was serious about purchasing a Jeep, wasn’t very knowledgeable about answering my questions and didn’t go out of his way to offer any kind of wow service.  Too bad as that guy ost out on a nice commision from me.  Next up was the Vaughan dealership as I had been in contact with a salesman there via email.

When I went in to meet him, I was forgotten about in the waiting area for almost an hour, and was literally about to leave in disgust when the head of the department asked if I had been helped, took me into his office and we started talking.  Small world as it turns out his wife’s brother was a manager at another Keg location and I immediately got the friends and family discount on my new Jeep. Win!

I had already done my shopping on the website, and knew exactly what model, colour and features that I wanted.  Turns out that this combination didn’t exist anywhere currently in Canada, usually when you purchase a new car that is not on the lot they do a vehicle search and will have it shipped in from another dealer, etc… Mine as configured didn’t exist, so they needed to order it from the manufacturer.  I cannot tell you how cool I would this concept to be, while I did have to wait several weeks for me Jeep it was being custom built for me and no one else (other than the Jeep that loaded and unloaded it from the truck) would ever drive it.

It had 3 km on the odometer when I was finally able to pick it up in April of this year.  Talk about building anticipation for something, every week or so I would email for an update on how things were going.  I didn’t know it at the time but when I placed the order Air Conditioning was added to it at no cost to me.  My mindset was, hey this is a car where the roof and doors come off, who needs air conditioning?  Right?  Well it turns out to be a blessing, as with four kids they are not always up for the wind blowing at them while zipping down the highway. 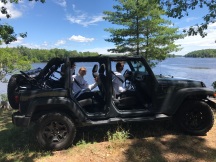 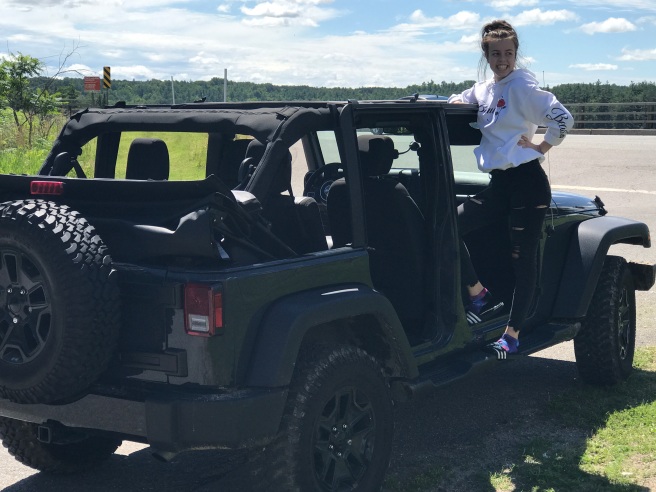 In the few months since I’ve owned this amazing vehicle I have already taken to many amazing places and seen some amazing things.  It was officially broken in during July as I was on a 10 day road trip down to Chicago and St. Louis with a group of friends to see baseball games at Wrigley and Busch stadium.  We camped along the way, and this trip was so enjoyable that it will become an annual tradition and might even appear on this Top 10 list rather shortly…  And immediately afterwards my daughters and I headed north to Ottawa for another camping trip where both girls got the chance to drive the Jeep on some abandoned country roads for the first time.

Dad even got a chance to do some off roading in it as well.

Everything that you could think about to put into an SUV, Jeep had it covered.  I had ordered both the Hardtop and Soft Top for it, the doors are so easy to remove when wanted and the upgraded Alpine sound system with eight speakers and all weather subwoofer absolutely rocks.  It was roomy enough for four guys, all the camping gear on our trip to Chicago.  It is lengthy enough that I can slide my kayak into the back with the rear seats folded down, and with the trailer tow hitch I was actually able to move into my new house simply y renting the 12 foot U Haul trailer.

I’ve been caught out in the rain with it before, which quickly turned into a monsoon and trying to put the doors back on when I get home was an effort in futility.  It actually collected several inches of water on the inside, and when the rain subsided I simply went out side and pulled out the plugs underneath the mats and quickly watched all the water quickly disappear.

I also had the misfortune of spilling an entire Jerry Can of gasoline into the backseat and floor one day while driving home not realizing the cap wasn’t screwed on properly.  The carpets were simple enough to pull right out, go through the washing machine a few times and simply placed back inside.  I have become that Jeep owner that will park his car wherever if no parking spots are available, case and point on December 23rd at the LCBO when the only spot left was the curb so I took it.

I laugh to myself hysterically every time I do something in my Jeep the average car owner just cannot do based on ground clearance, off road capability or just being plain dumb.  After all it why I bought the Jeep in the first place.  Not taking advantage of ALL that it can do would be a waste of all it’s features. no?  I have also discovered an old road that leads into an abandoned field our near Hilton Falls in Milton that I have driven in and around a few times now which always tests out just what the Jeep in capable of doing.

Next summer I need to go to the Black Mountain Off Road adventure park in Kentucky which has 500 miles of trails for 4 by 4 owners all laid out by a trail rating system similar to ski hills.  And now that we have snow, and a lot of it here in Barrie my Jeep slices through the worst winter storm just like a hot knife through butter just like I knew it would.  I love my Jeep as much as one man can love an inanimate object.  The neighbours thought I had issues when I first got it as I would wash it almost daily!  My mindset was that I am only going to own a new car like this once in my lifetime and i wanted it to look the part for as long as possible.

So if you ever see me in passing on the roads, give me the Jeep wave and I promise to wave back!