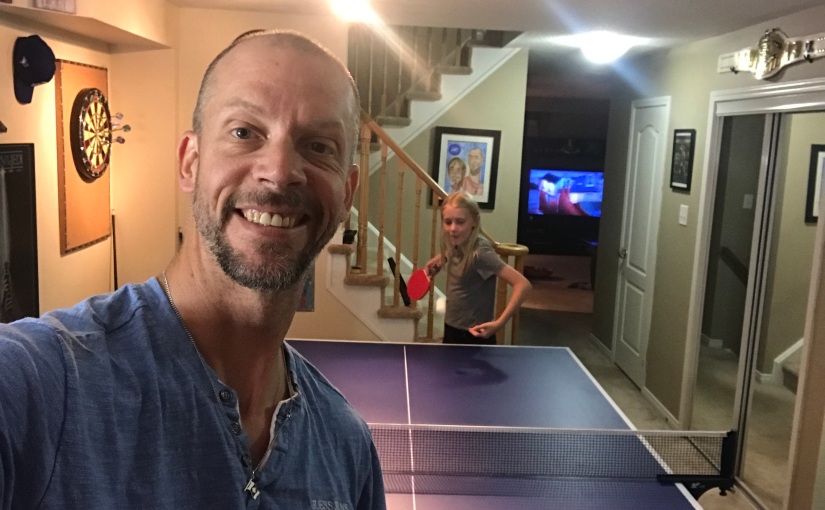 Most guys would either have their man cave in the garage or perhaps down in the basement.  I would argue the conversation goes something like, “You want to do what?  Not in my house…”  I jokingly say that as when the idea struck me to build my own recreational room I knew I would have no limitations and could put it wherever I wanted.

The first thing I needed to consider was the room dimensions as I knew the centerpiece of the room would be a brand new pool table.  Living in a four bedroom townhouse with four children, well I didn’t have many options.  Had I been living at my old house, which had the perfect Great Room that would have been a pool and ping pong heaven, alas the choice here were down to three.  The basement offered the most room, but no thanks.  That left either the front room or the family room attached to the kitchen. 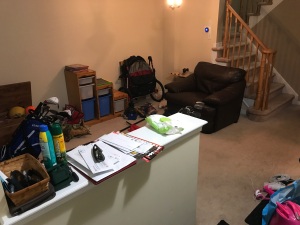 The front room offered a few more feet of space and was the winner.  Originally this room had turned into a kid storage area, with some toys but didn’t really get used all that much.  So in July construction begun!  I cleaned out my basement, which in all reality didn’t have much in t to begin with and that area was turned into a kids play palace and Dad workout area.  The large floor space is enough for them to run around, ride bikes and wiggly cars, and when they leave all their toys scattered about well no can see it!!

I scavaged all my pop culture items that I had for a while, and some I haven’t put up on walls in years.  Can someone explain to me why I can’t hang Star Wars posters in my house when they are a big part of defining who I am?  I had to look at two ladies playing the violin for years and was never explained what was important about that painting or why I had to stare at it for nine years…  I would much rather have had Darth Vader scowling at me instead.  My Star Wars posters are originals back from when the films first came out, I have had them for almost 35 years and have been hard mounted on wooden frames and are the centerpiece of the room. 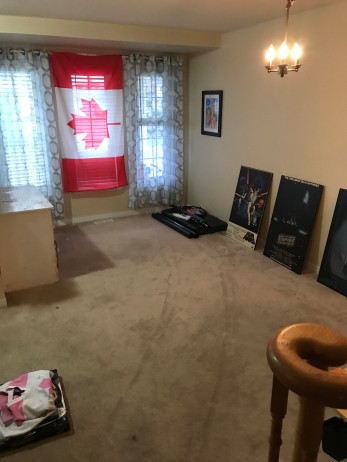 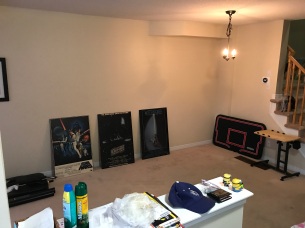 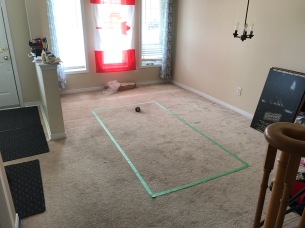 Growing up a big sports fan, and having the extreme pleasure of meeting 4 players from the 1992 and 1993 World Champion Toronto Blue Jays and I have some autographed memorabilia as a result of those meetings.  I also went out shopping for additional pieces to the room, and added my own homemade items as well.  I knew the room would need a chalkboard and or a dry erase board to keep score, etc… I had able to turn one are eisle into two custom scoreboards and four home made lightsabers that act as picture holders and chalk holders along the wall.

I’ve added Canadian flags, and some DC Comics items as well focusing on Superman and a few other items as well.  Walking around just looking at the room, I can tell you where each piece comes from and why is it important to me, why it was an important part of my history.

The room will never really be finished, as I continue to add more bling for the wall every once in awhile.  A new R2-D2 wall bust being the latest boxing day purchase to be installed this weekend… this room has quickly become my favorite in the house and one where I am completely at peace.  The kids enjoy this room almost as much as I do… almost. 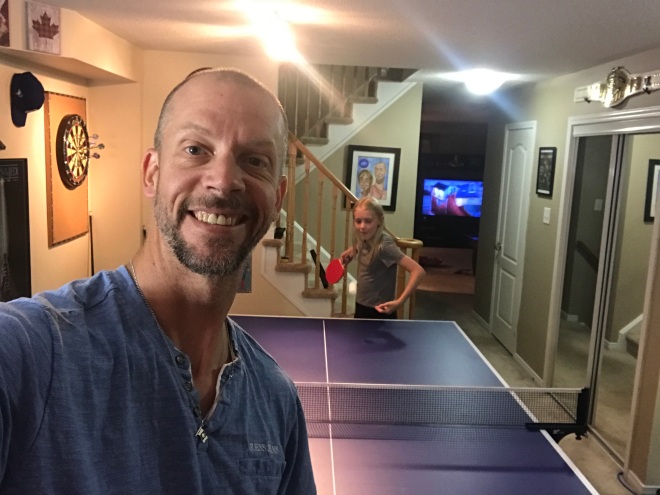 Megan and I enjoy playing ping pong together, and she is quite good.  She has already beaten me a few times playing, and plays smart.  Always putting that ball where I am not, and requiring me to make super athletic feats just to return the ball.  Once she learns how to hit an overhead smash, I am completely toast.

Jennifer, Austin and I love to play pool together.  At the moment they use their hands to  roll the ball into the pockets and have so much fun.  It’s spending time with Dad that they love, but both will grow up being excellent pool players, and it’s also great for working on the hand eye coordination.

I’ve have my circle of friends over many times and we always end up playing pool or darts, during baseball season I move a TV into the room and would come home after work through on a Dodgers game and shoot a few racks.  You could call it my happy place.

I have also received many positive comments on the room when it is seen for the first time, I remember the time I had ordered Domino’s pizza for the first time and the delivery driver was so enthralled with what he saw I invited him in to take a look around.  Twenty minutes later a different driver showed up at my door with a 2L Cola (that I didn’t order) and I suspect when the first driver got back to the store he was sharing the story of the awesome room that he just saw and this second driver had to see it for himself.  Got me a free 2L cola out of it… 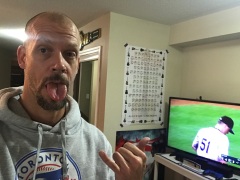 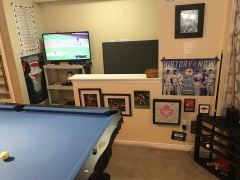 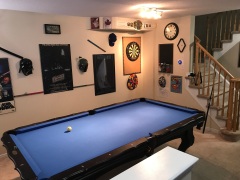 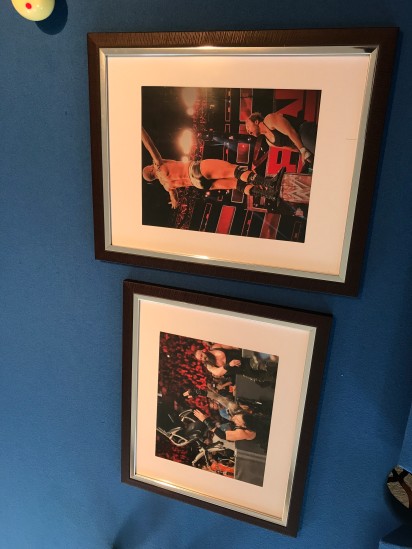 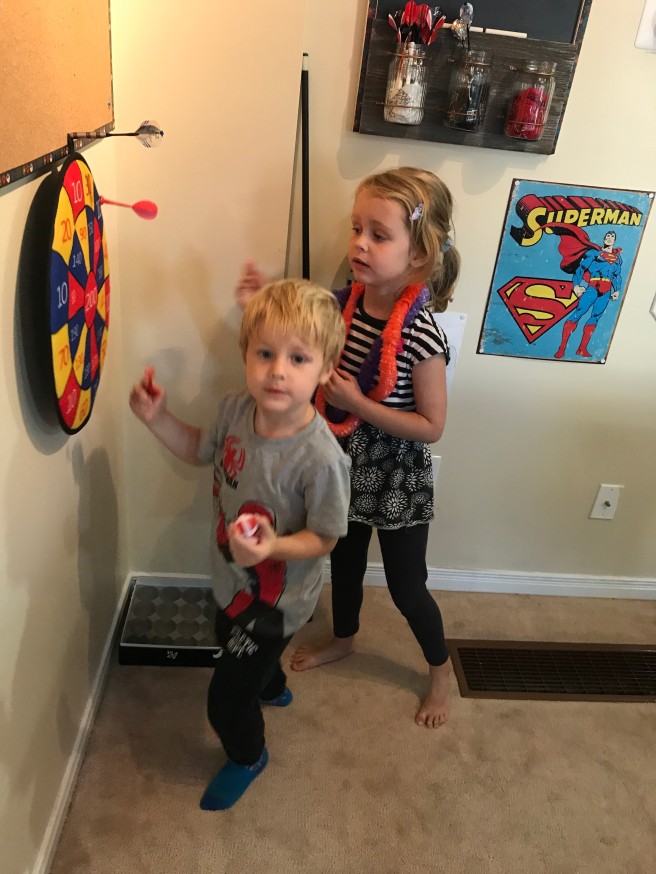 Two final thoughts on the rec room, as it has turned into my favorite place in the house.  It will be fully transportable when it is time to move to another house and can re replicated and enhanced at the new place.  More items can and will be added to the walls as time goes by, but much more than all that is the memories that have been creating in this room with my friends, but more importantly my children.  Boyfriends are starting to come around and the kids entertain in that room, I have family events in there all the time and my pool game has improved by 500% over the past six months.

I love my man cave, everyone should have one of their own!