There have been several life altering events in my past, and beyond family type things (marriage, children, divorce…) the sport of Triathlon has had the biggest impact for sure.  The story starts in October of 2005 when my first wife and I separated, I was an inactive, unhealthy, unhappy 238 pound man.  It was New Year’s Eve I had been sitting in a bubble bath reflecting on life and just how messed up things had gotten in a short amount of time.

Getting out of the tub I took a good long look at myself in the mirror and realized that I needed to do something about the reflection staring back at me.  I was going to start dating again shortly, and with any luck and or charm on my part a woman was going to be seeing me naked again.  I didn’t like what I saw reflecting back at me, how would she?

At that point in my life I did not know the difference between a protein, a carbohydrate and a healthy fat as my diet consisted of grilled cheese sandwiches, kraft dinner, hot dogs, pizza and whatever take out I would order.  It also didn’t help that my job, as a Kitchen Manager for the Keg afforded me free food and drink on a daily basis.  In my first five years as a manager I put on about 10 pounds a year, when I started managing I was a 6 foot 5 inch, 170 pound beanpole.  Now replaced was a beaten and broken 238 pound man, whose every single pair of pants would not button up as I refused to buy a 38 inch waist pant.

I was into my early 30’s and had not done any form of exercise since I was a teenager, I smoked weed on a regular basis and that often led to the eating of whole pizzas in one sitting, and tons and tons of junk food.  I think my personal record was 37 Halloween chocolate bars, and I knew that I was on the fast track to obesity?, diabetes? and who knows what else.  It was that night I decided that I needed to do something about the direction I was headed.

That winter I started to workout on a beginner weight bench that I purchased at WalMart and started to speak to some friends at work about ways to change and things that I could do to improve my health.  Two people in particular stood out, Jimmy Rego and Jeromy Mueller.

Jimmy was a server with the Keg, but had been a collegiate cross country runner for the University of Arizona back in the day.  He literally taught me how to run, this is how naive I was, I did not know how to go for a run.  Anyone watching me would see this guy walk out his door and try to run as fast as he could right from the start, and due to my years and years of inactivity I  couldn’t reach the end of my street without my lungs exploding and fire in my sides.

We talked many nights about setting a pace, starting easy and building into the run, doing a combination of walk and run to build up my stamina.  At the time it felt like I was being given the universe’s greatest secrets, and slowly overtime I increased my stamina and increase the distance.  One story in particular sticks out as Jimmy had challenged me to do a long run to see what it would feel like.  So I did, I had a 7km course that looped past my house and off I went, I don’t recall what the intended distance was but I do recall doing three laps of that circuit and when I got home I felt so elated at my accomplishment!  Fast forward to later that night and I could not lift my legs or get out of bed, I had to crawl across the floor to get to the bathroom.  It took about a week for everything to feel normal again, but I learned that day about how to push myself to accomplish some crazy things.

Jeromy was a fellow manager, and has his own story about how working out changed his life.  He was a beast and trained hard everyday, and still does to this day.  He invited me over to his house several times to workout, and through him I learned about proper form when lifting weights but more importantly proper nutrition.  It started with post workout protein shakes and it was during this time he explained how a protein worked, what carbs were good for, etc…  Again, it was like a light had been turned on inside my head.

The exercise has dropped my weight down close to 200 pounds, and it was the change in diet and increased nutrition cracked that barrier I had trouble passing and quickly dropped to about 190.  It was an amazing six months, but for me something was still missing.  I had joined the world of online dating, far different in 2007 than it is today and I actually met the lady that would become my second wife years later.

I had two young kids, Emily and Megan and the Keg had provided me a great schedule that allowed me to have my children Sunday morning through Wednesday morning when I would return them to mom’s house.  Working a lot of evenings hours left many daytime hours to fill.  Just sitting around by myself in the day became very hard to bare, and I needed to find something to do, a hobby, a sport?

My sister suggested that I come watch a friend of hers that was competing in the Milton triathlon in June, and while I didn’t end of going and watching the seed had been planted for the next evolution of my life.  I began to do some research on the sport of triathlon, as honestly I had never heard of it, and I had no idea how many races were happening throughout Ontario in the spring and summer months.  I did some research and found what I thought was the perfect course for a beginner, the Niagara Give it a Try race would be the one I decided to enter.

A Give it a Try triathlon is a 400 meter swim, followed by a 10km bike ride and then finished up with a 2.5km run.  I picked this particular course as the swim was along the shore of Lake Ontario and they claimed you could touch the bottom the entire swim, perfect I wouldn’t drown.  The bike ride was completely flat which again was perfect as I was riding a very old, and very heavy mountain bike, and then the run.  I had a full cheering section with me there on that day, my dad, sister, ex-wife and both my children came out to watch and cheer me on.

I had trained for that day, but really had no idea what I was getting myself into.  Being my first race every I had only the basic gear, no wet suit, no fancy bike, no spandex outfit and no light weight race shoes.  Just my drive and determination to cross that finish line, in under an hour I had hoped.  Walking down along the shore to get the swim start line, I noticed a dead fish lying on the shore and I thought to myself…

“What the hell have I gotten myself into?”

When the gun went off and I ran into the water to start, I didn’t take into account just how cold Lake Ontario water is, even in July.  Everything inside me seemed to seize up as it was so very cold, but I managed to do a combination of front crawl, breaststroke and floating on my back when needed to finish the 400 meter swim (and being truthful it was the discipline that I had trained the least for).  I did make it to the swim finish and did not have to be rescued by any of the lifeguards on duty, running up out of the water I saw both of my young ladies there cheering Daddy on.  I made a point of stopping and giving each of them a hug and a kiss and I was on my way to the bike.

I knew biking would be my strongest of the three and actually had a pretty good bike, that indeed was flat with no hills to worry about at all.  There were a few times when I did get discouraged, as my manhood was challenged when I saw many, many other athletes passing me on the course.  Most I am sure where in much better shape than I was, and were riding bikes that most likely weighed much less than my ancient clunker.  I must have given it maximum effort while I was out on the bike as when I got back to the transition area I was physically spent, yet I still had a 2.5km run to do!

I put on my best and bravest face for my family, although it felt like my lungs, sides, and legs were all about to explode.  I smiled at them, and I ran, and ran right out of the transition area until they could not longer see me and immediately started to walk.  I felt a little discouraged at my inability to run but I was still making forward progress… I eventually caught my breath, the lungs stopped burning so much and I was able to finish strong by running back into the chute, and across the finish line.

I had unbelievably finished my first triathlon, in just under an hour.  The time to me didn’t matter and driving home afterwards I had such a sense of accomplishment that I had never felt before in my life.  I loved this feeling so much that I would end up doing 4 more races that summer and fell in love in the sport of triathlon forever.

Reaching the end of this course, the journey I had taken and the feelings it left inside me, changed me forever.

Over the next three years I would go on to do some pretty amazing things in this sport, but that my friend will be another post here in the future.

I invite you all to get out there and Give it a Try!  It might just change your life as well! 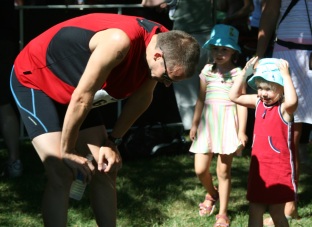 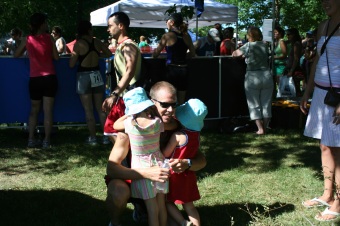